thoughts on creating the world to come.

“In the last days the mountain of the Lord’s house will be established as the highest mountain. It will be regarded more highly than the other hills, and all nations will flow together there. Many people will go and say, “Come, let us go up to the mountain of the Lord, to the house of the God of Jacob. He will teach us His ways and we will walk in His paths.” For out of Zion will go forth Torah, the word of the Lord from Jerusalem. He will settle disputes among the nations and provide arbitration for many peoples. They will hammer their swords into plows and their spears into pruning knives; nations will not lift swords against nations, and they will no longer be taught war.”

This week’s Parsha Text contained: the Flood story, a covenant, a Vineyard story, a genealogy, the Tower story, and another genealogy.

In it, we got to wrestle with one of the few stories of wrath in the Bible… The Flood (or the deluge as my Text calls it). Most of the icky parts actually showed up last week, like God’s declaration behind the whole thing. This week God converses with Noah, and the author details how the flood comes and goes. In those details are two important takeaways.

First, a chiasm. The details of the chiasm within the Flood story can be heard here or seen here. At its center, verse 8:1

“God remembered Noah, as well as all the wildlife and all the livestock that were with him in the ark. God caused a ruwach to pass over the earth, and the water began to subside.”

What are we to gain if this statement is the center of gravity for the Flood story?

This too, I think, has two components. The second component is actually the start of the second important takeaway found in the details of the Text.

The first component of the Flood story’s center of gravity is a God who remembers. Which, is very odd if you think about it. There’s only one ark floating around. Is it that hard to remember Noah and the ark are still around? Maybe it’s less about Noah and the ark. Maybe it’s more about Noah’s name. What does Noah’s name mean? (a great opportunity to utilize Blue Letter Bible 😉 )

That’s good! But it still doesn’t help me tie a bow around the Flood story. Lets see what happens when component one (God remembered rest) and two are connected.

Ruwach, in verse 8:1 above, is the transliteration of a Hebrew word.

At the very beginning of God’s Narrative, in Genesis 1:2b, “the ruwach of God moved upon the face of the waters.”

First, the chiasm. Second, a re-creation.

Let me line this up for you visually (this is almost entirely Aleph Beta brilliance): 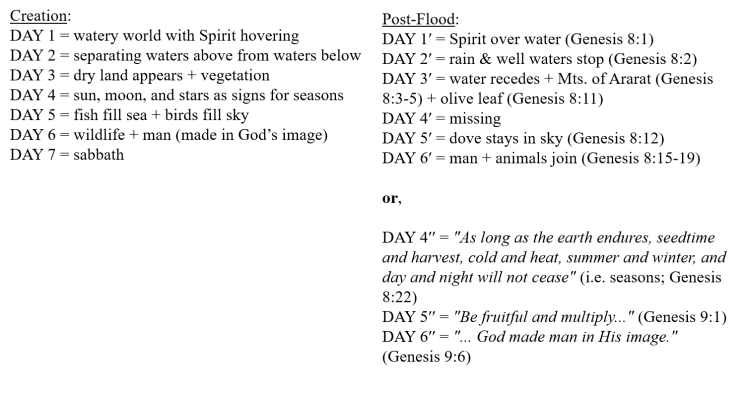 No matter how you look at it, the parallels are striking! And, regardless of whether the prime days or double-prime days are the true parallels, DAY 7 is missing from re-creation.

One crucial element of Eastern teaching/learning: when something is left out (or put it in a different place 😉 ) — it’s a big clue the missing piece is important and often misunderstood.

We expect the author to end re-creation like creation… by resting (we talked about this last week).

But, to make sure we actually remember to rest, maybe the author starts re-creation with DAY 7. Look again at the center of the chiasm. At first glance part b (Genesis 8:1b) matches perfectly with DAY 1. So intuitively we want to move forward finding the connections. But, if we look at part a (Genesis 8:1a) again, it sounds like DAY 7.

What if the center of gravity for the entire Flood story is a more pointed invitation to start your creative desires (before they go awry) trusting that your God knew when to say enough (remembered to rest) and is not holding out on you?

It’s as if God is still telling the same narrative nine chapters later.

The Tower story falls in the same place as Lamech’s declaration fell in last week’s parsha. Is the author trying to tell us they are parallels too?

If we recall, Lamech’s declaration insinuates that mankind has found salvation in something other than God, an agricultural technology. His declaration sounds like rejoicing in the ability to do it without God.

So, what happens in the Tower story? People decide to make bricks (Genesis 11:3). Hmmm — new technology. But, what for?

Their declaration sounds like rejoicing in the ability to do it without God.

In fact, God only comes down and speaks after the second declaration (Genesis 11:5-7). Bricks aren’t necessarily problematic in God’s eyes. But, glorifying your own name without recognition of the Creator… is.

Our section of Text in Luke is bookended by discussions surrounding the Temple Complex. And everything in between likely has a reason for being sandwiched. What’s in between? Oh, just the signs of the end of the age, the destruction of Jerusalem, the coming of the son of man, a fig tree parable, and the need for watchfulness.

End times? Destruction? Watchfulness? Are we back in the Flood story? In fact, the corresponding Matthew Text (Chapters 24 & 25) actually says, “as the days of Noah were” (Matthew 24:37-39)! But, red letters rarely talk about wrath. What’s all this about? I think this notion of end times, whether something will happen as detailed here or not, is beside the point of the author putting Jesus’ words here.

So, what do we do with this Text?

Well, Isaiah 2, one of the connected prophet readings, seems to have something different to say about in the last days and nations rising up against nations.

So, is Jesus being serious? Maybe. Maybe not.

But, the author is serious about tying Jesus’ words to what is going on in our parsha Text.

Back to the bookends.

“some people were remarking about the Temple Complex, how beautiful its stonework and memorial decorations were” (Luke 21:5).

Who built the Temple Complex? Herod the Great.

I stood there. The stones are enormous. Perfectly cut. The corner is perfectly flush.

Those following Jesus were not wrong… it was adorned with beautiful stones.

But, was Herod a righteous man in the eyes of the LORD? Was Herod a man after God’s own heart? Then why did Herod build the Temple complex?

Why did Herod do anything? For himself.

It is with this understanding that Luke backdrops the end times Text.

“These things that you see (made by man, for man) — the days will come when not one stone will be left on another that will not be thrown down!” (Luke 21:6).

If it weren’t for the red letters I might think I’m reading the prophet Isaiah.

And, Isaiah 2 seems to suggest God actually wants nations to stop going to war and come together to worship. Moreover, Isaiah 2 even positions itself as the redemption of the Tower story. In which, all the nations will flow together (Isaiah 2:2) and people will say come let us go up to the mountain of the LORD (Isaiah 2:3).

But, it requires something… that we stop worshiping the work of our own hands, that which our own fingers have made (Isaiah 2:8).

Almost as if God is telling us, if we stop trying to make a name for ourselves, nations could unite.

As if God has more for us to do in this world, than waiting for it to be over.

But, instead we have leaders in the Church talking about a sinful society, one deserving of wrath. Some saying God’s wrath is already at work.

During an interfaith event held on NC State’s campus a Christian staff member from The Crescent Project said that all the sin in New Orleans led to Hurricane Katrina. I can understand this perspective based on a surface reading of the Flood event. Here’s how that story-line goes: We have God’s Plan A (i.e. Creation into the Garden). But, then someone eats something, forcing Plan B (i.e. Post-Tree of Knowledge world). In last week’s parsha God makes a declaration that Plan B isn’t working, so He’ll need to start over with a new plan, Plan C (i.e. post-flood world). In this week’s parsha we find out Plan C doesn’t work so well. The whole Tower thing happens leading God to enact Plan D (i.e. Post-tower separation of language).

Do the contingency plans ever stop?

Based on the Hurricane Katrina Statement, it sounds like God is responsible for Plans E, F, G,… Z… and beyond.

Having several, or infinite, contingency plans does not sound like a God, it sounds like something a good manager would do. Is God just a manager?

If we are to believe in the theory of contingency plans… at what point do we stop and ask the question… did the Creator mess up? And it is this question that gives me pause, and hope, that there is more to God’s narrative than a surface-level explanation for the few stories of wrath.

There is a looming question that might pertain to our lives…

Why doesn’t Noah intercede on mankind’s behalf and argue with God to stop the flood?

It seems like he clearly had God’s ear; “Noah, found favor in the eyes of the LORD” (Genesis 6:8). Moreover, the Text is explicit in telling us “Noah was a righteous man, blameless among his contemporaries; Noah walked with God” (Genesis 6:9b). What is Noah’s righteousness? Seemingly, the Text tells us — blamelessness. Several rabbis have pointed to this understanding. Ramban (on Genesis 6:9) says Noah was not tempted by idolatry or soothsayers, he cleaved to God alone. Rabbi Haim Sabato states, “through his (Noah) merit he saves himself and his sons” (Rest for the Dove). Noah did not break the rules. As a rule follower, apparently the only one, he was guaranteed salvation.

Later, Jesus talks about the righteous and repentance in Luke 5:32 and 15:7 (granted not this week’s connected Text). And, the Septuagint confirms the Greek word for righteous in the Lucan Text is the same used to describe Noah in Genesis 6:9.

It’s important to understand that the Pharisees were in. This, is likely one of the biggest pieces of context that Christians miss. The Pharisees are righteous, the Luke Texts say as much. The Pharisees are rule followers, cleaved to God alone. They are in. They are Noah. But, Jesus spends a few years directly engaging them. Why? What are they missing? What did Noah miss?

Here’s where I think the beauty of cinematography helps. It reveals the deeper struggle of Noah (as portrayed by Russell Crowe). He watched the whole world drown. He heard the blood curdling screams of men, women, and children. And, afterward, he lives knowing he did nothing to save them.