thoughts on creating the world to come.

Abraham got up, and bowed before the people of the land, the Hittites. He said, “If it is your desire to help me bury my dead, then listen to me: ask Ephron son of Zohar on my behalf to give me the cave of Machpelah, which belongs to him, the one at the end of his field. Let him sell it to me in your presence at its full value; then I will have a burial site of my own.”

Our Torah portion helps us understand what it looks like to trust God is not holding out. This central idea is seen in Abraham’s negotiation, and by juxtaposing Rebekah’s character from that of her family.

In the Midweek Reading Guide, we asked why the Text thought it so important to tell us the location of the burial plot at this point in the Abraham saga. We don’t need to be biblical historians or geographers to notice the section is bookended by two very important ideas about location.

First, the Text gives us Abraham’s, almost unnecessary words, “I am a resident alien among you (Genesis 23:4a).”

Second, at the end of the section, we are told Abraham buried Sarah in the land of Canaan (Genesis 23: 19).

Remember, God directly promised Abraham land and offspring. Yet, Sarah just died and later in this parsha Abraham dies. Ishmael and Isaac were born, but what about the land? The promised land, the land Israel will not end up walking into until Joshua’s leadership, is the land of Canaan!

Listen, this cannot be overlooked. The bookends of this section tell us something tremendously important about the person God chose to partner with — Abraham is not willing to force the mission. I waited to point this out, but very shortly (like immediately) after God called Abram back in Genesis 12, Abram and his family end up in Canaan (Genesis 12:5).

In the next verse, we find out that when they got there, they passed through because the Canaanites were in the land. Abram was very aware, and cautious, not to displace people in the process of fulfilling the mission.

And now, in Genesis 23, we see the same recognition. Abraham recognizes he is a foreigner in the land. He recognizes this even though God promised him this exact land. And yet, he doesn’t use the promise to push an agenda.

How stark is the contrast between this guy and the colonialism mentality still present today?

Moreover, he so deeply values the inhabitants of the land, that he is unwilling to take the burial plot for free. He wants to pay, in full, the value of the cave. This guy gets it. He trusts that God is not holding out on him. Even as his time is running out and he has yet to realize the second part of the promise (i.e. land), he does not force his legacy before death. And, he could have. Remember, he took a few good men and defeated a bunch of kings and their armies nine chapters earlier in Genesis 14. Seems like he has the military infrastructure to push the Hittites off the land.

Additionally, Abraham doesn’t see the free land as a blessing from God. Rather, he recognizes the blessing is in paying the people of the land the full worth, and only after they choose to share the land.

Yes, this is Abraham we’re talking about, so maybe it’s hard to relate. But, remember from last week, Abraham had moments of scarcity mentality. He had moments of mistrust. Yet, he learned from them. In this moment, likely the scariest moment of his life because his wife just died and he’s about to die — he didn’t use grace as an excuse to act out of scarcity. Instead of self-preservation, Abraham preserved the character of God and modeled a deep trust that God is not holding out on him.

Another story the Text refuses to let us overlook is in regards to Rebekah.

A couple years back, I shared part of these powerful verses and how they invite us into what God’s story is and what it is not. In them, the author wants us to notice the stark difference between the values Rebekah up holds and those of her brother, Laban. Laban says hospitality is important, but shows riches and possessions are the true currency of his heart.

Look carefully at the slight differences in how Eliezer recounts his journey when speaking to Laban and Rebekah’s family. Rabbi David Fohrman points out several differences in the re-telling (see table). Eliezer adds to, and switches, the story-line to focus more on possessions, success, and family than the previous focus on the attribute of loving-kindness.

Rabbis, like Fohrman, have noted that once Eliezer realized that Laban pretends to value loving-kindness — he quickly changed his story. Eliezer needed to speak Laban’s language to make this betrothal more appealing. In the original account, Eliezer gave Rebekah jewelry as soon as he saw the acts of loving-kindness — that’s all he needed to know she was the one. Not so in the recount.

Here’s the deal, the discrepancies in the story-line matter!

If we stopped the Text before encountering Laban, we know one thing — Rebekah embodies hospitality. She offers to hydrate the camels. There’s 10 of them. Camels drink a lot. She has one bucket. Do the mental math on the number of trips up and down the stairs of the well. Not to mention, she willingly hurried (Genesis 24:20).

This is exactly the woman God would choose to carry on His mission. And, He does. She mothers Jacob (and Esau). But, after we understand Laban’s value-system, portrayed in-part by the discrepancies in Eliezer’s recount, we realize something much more profound about Rebekah.

Rebekah does checed in a place where everyone else just talks about it!

That’s how the mission of God is realized and continued.

Our Luke Text (1:5-25) continues with women of the story as we are told about Elizabeth’s impending conception of John.

M.D. Goulder suggests several parallels between Abraham/Sarah of the Genesis Text and Zechariah/Elizabeth of the Luke Text (see table). 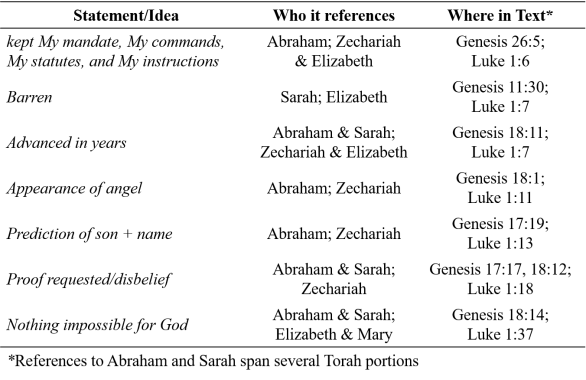 The question is why they exist. Is John somehow connected to Isaac’s story?

Wait, then, are Isaac and Rebekah connected to Joseph and Mary? And, Jacob to Jesus?!? We’ll see if that turns out to be true in the coming weeks.

In the meantime, what I find fascinating is that the angel speaking to Zechariah quotes Malachi.

“He will turn many of the sons of Israel to the Lord their God. And he will go before Him in the spirit and power of Elijah, to turn the hearts of fathers to their children, and the disobedient to the understanding of the righteous, to make ready for the Lord a prepared people.”

““Since the days of your fathers, you have turned from My statutes; you have not kept them. Return to Me, and I will return to you,” says the Lord of Hosts.”

“Look, I am going to send you Elijah the prophet before the great and awesome Day of the Lord comes. And he will turn the hearts of fathers to their children and the hearts of children to their fathers. Otherwise, I will come and strike the land with a curse.”

To which, you’re going to say there is no Malachi 3:23-24. Oh, but there is. In the original Hebrew there is no chapter 4, just a longer chapter 3.

I think Gabriel’s quote is brilliant because the angel is announcing the coming of John and Malachi is connected to a messenger of hope that paves the way.

To better understand the connection here, we need to know the context to which Malachi was speaking. With context, we start to recognize that the Luke Text might be setting the same stage at the outset.

This is the context of Malachi:

– Marty Solomon, Covered in His Dust

This too, is the context under Herod the Great and the Roman Empire. And, dare I say, under Pax Americana.

Behold, a messenger was sent then, and another is coming in our Gospel Text, to prepare the way.

But instead of inviting followers of Jesus to turn from cultural servitude, some pastors worship, and even become, the Labans of the world.

And, you know who is not worth imitating… the Labans of the world.

Labans talk about hospitality, but do not do it.

Labans only engage people after they see what’s in it for them.

And so, when Laban shows up on the pulpit, and disciples more Labans, it’s not shocking that pastors find themselves having to convince a church body to partake in percentage giving. Moreover, when that conversation has an end goal of 10%, rather than a starting point of 10% — it’s time to realize the pastor has modeled the lie of the good life, not what it means to follow Jesus.

The entitled, following the leadership of their pastors, end up telling the Rebekah’s of the world that they are reckless and naive.

When in reality, she has the internal strength to model loving-kindness in a place where there is none!

This may be one of the most important things we expose in the real-world applications section — just how dangerous, persistent, and prevalent entitlement mentality is among modern-day people who claim to follow Jesus.

In most major cities, including Raleigh, a housing crisis exists. Aside from the barriers to actually buying a home, communities impose a regressive property tax.

Now, I’m not anti-tax. I think communities should redistribute wealth. But, the property tax design unfairly burdens the poor.

If a median earner owns a median home, the combined property tax owed is: $2,384

As a percentage of income, the median income household pays double what the $120,000 household pays. The median earner has twice the burden of owning a home.

And, we aren’t even talking about the Federal government’s definition of the poor yet.

How flipped is the narrative we tell ourselves compared to the one Abraham and Rebekah told with their actions?

5 thoughts on “The Shuvah Project #7 — Worth Imitating”